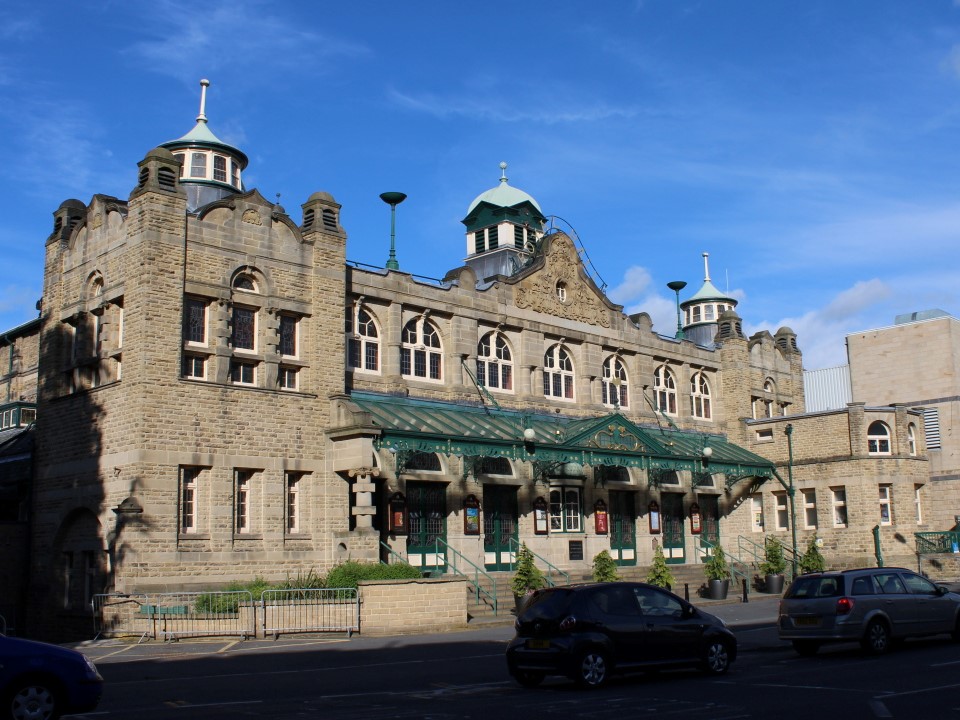 In late June, 43 members of The King Edward Choir, including family members and members of the International Relations Committee, flew to Harrogate, England, landing at Manchester Airport for easy access to Yorkshire. The group was met by members of the Harrogate Borough Council with a bus to deliver all participants to various hotels in the Harrogate area; these included small boutique hotels, large international hotels, and some historical venues such as the Old Swan where Agatha Christie sojourned during her famous disappearance! After a few hours to relax and settle in, a reception was hosted by the Mayor and Borough Councillors at The Cedar Court Hotel, by the famous Stray, where champagne and canapés were the order of the day. The choir and friends were made to feel very welcome indeed. 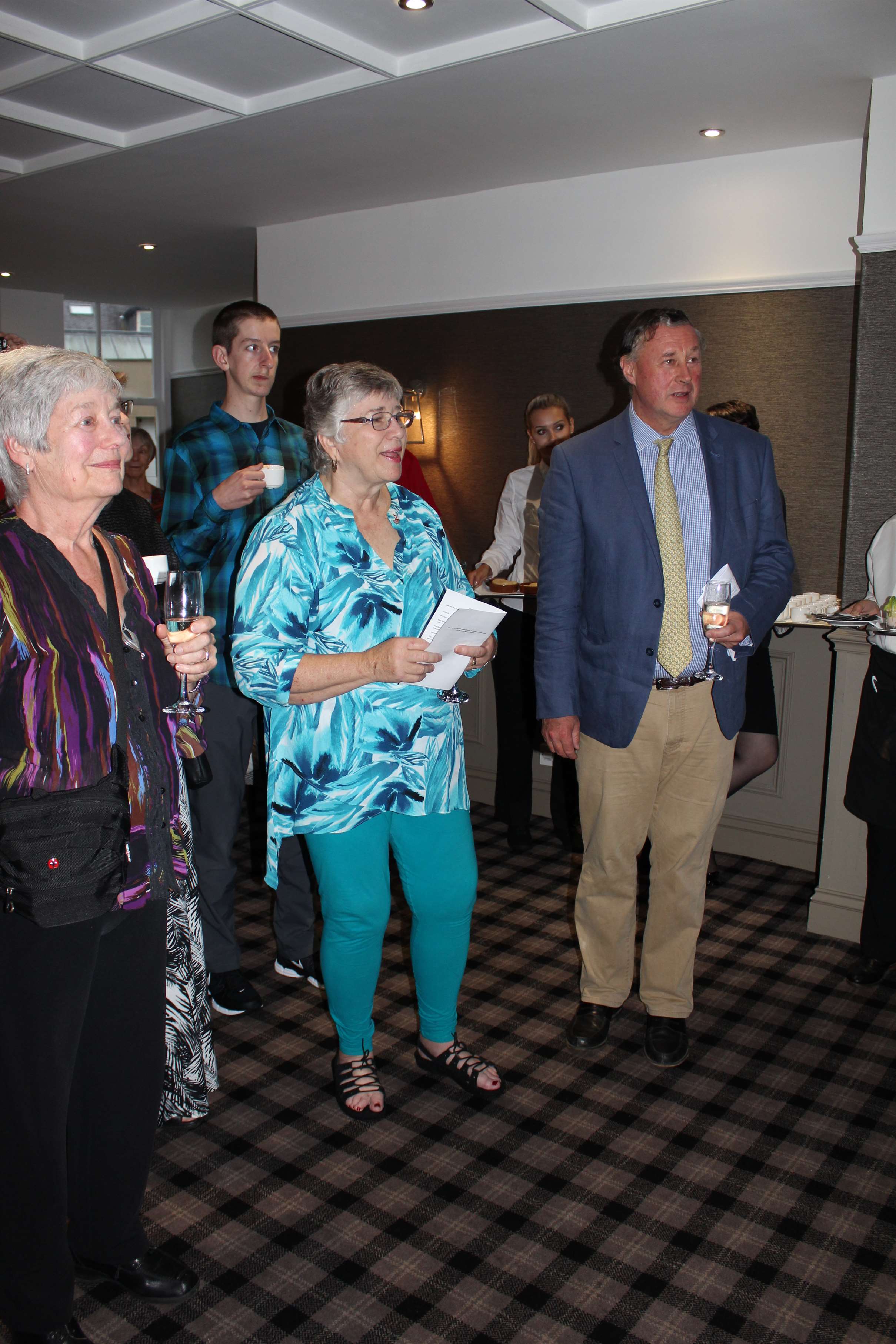 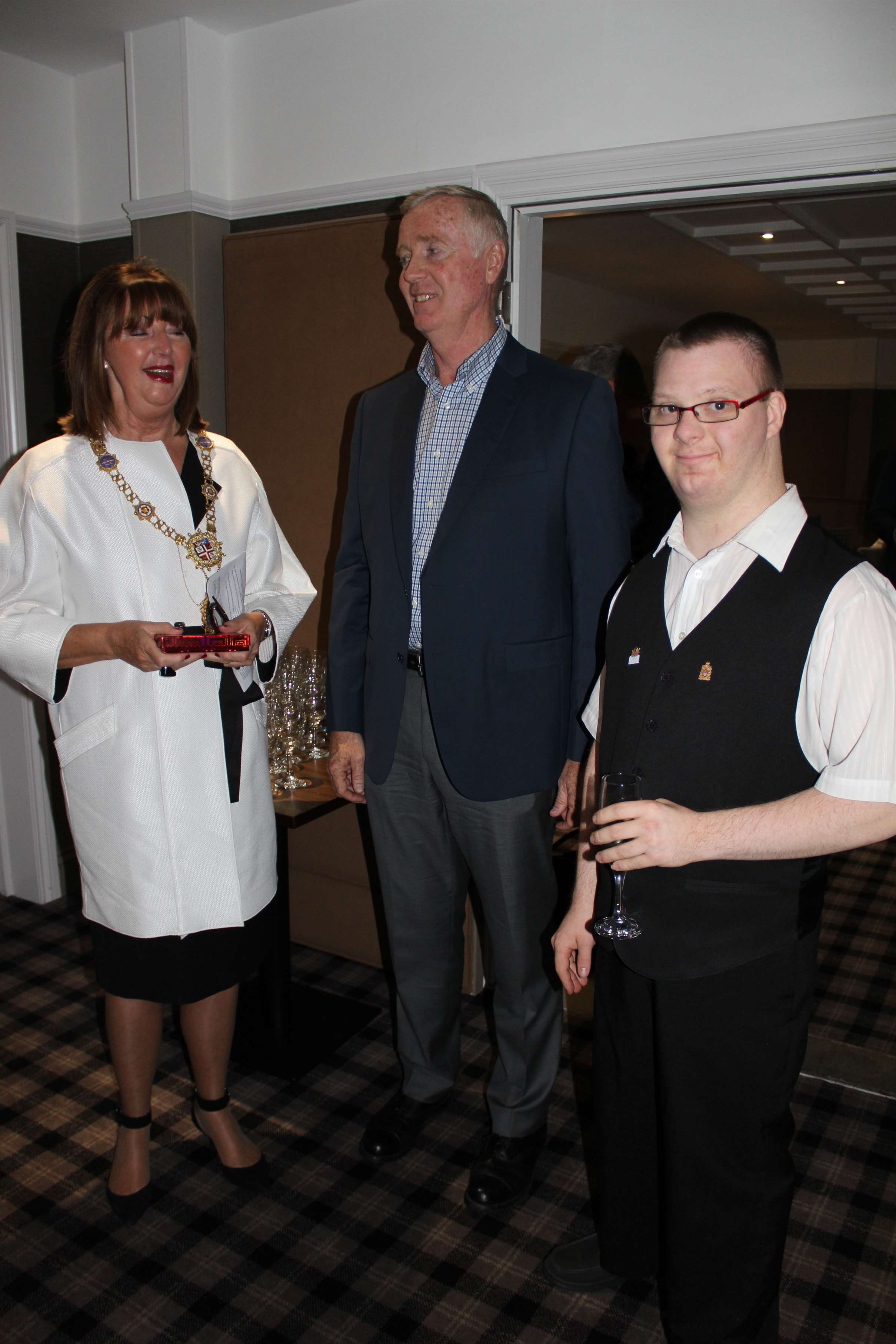 The following day was Canada's sesquicentennial (150 years) and a very special day to be with our twin city. The choir headed out to Ripley Castle to a fabulous welcome from Sir Thomas Ingleby, whose family has owned the castle for many generations since the 13th century. Rehearsal for the evening took place in the concert venue of All Saints Church in the village of Ripley, a particularly special place to celebrate Canada Day since Sir Robert Barrie, after whom our city is named, is buried there. Following the rehearsal, the choristers were treated to a delicious English tea in the Castle’s snack shop and a personal guided tour of the Caste by Sir Thomas. Of great interest, was the priest's hole hidden behind the wainscotting in the armaments room and the numerous artefacts that the family have accumulated over several hundred years. Sir Thomas gave an interesting insight into his ancestors’ behaviours and choices as they ended up on the losing side during the Civil War, with Thomas Cromwell actually spending a night in one of the ground floor rooms, carefully watched by Lady Jane Ingilby of the Castle and her pistols! 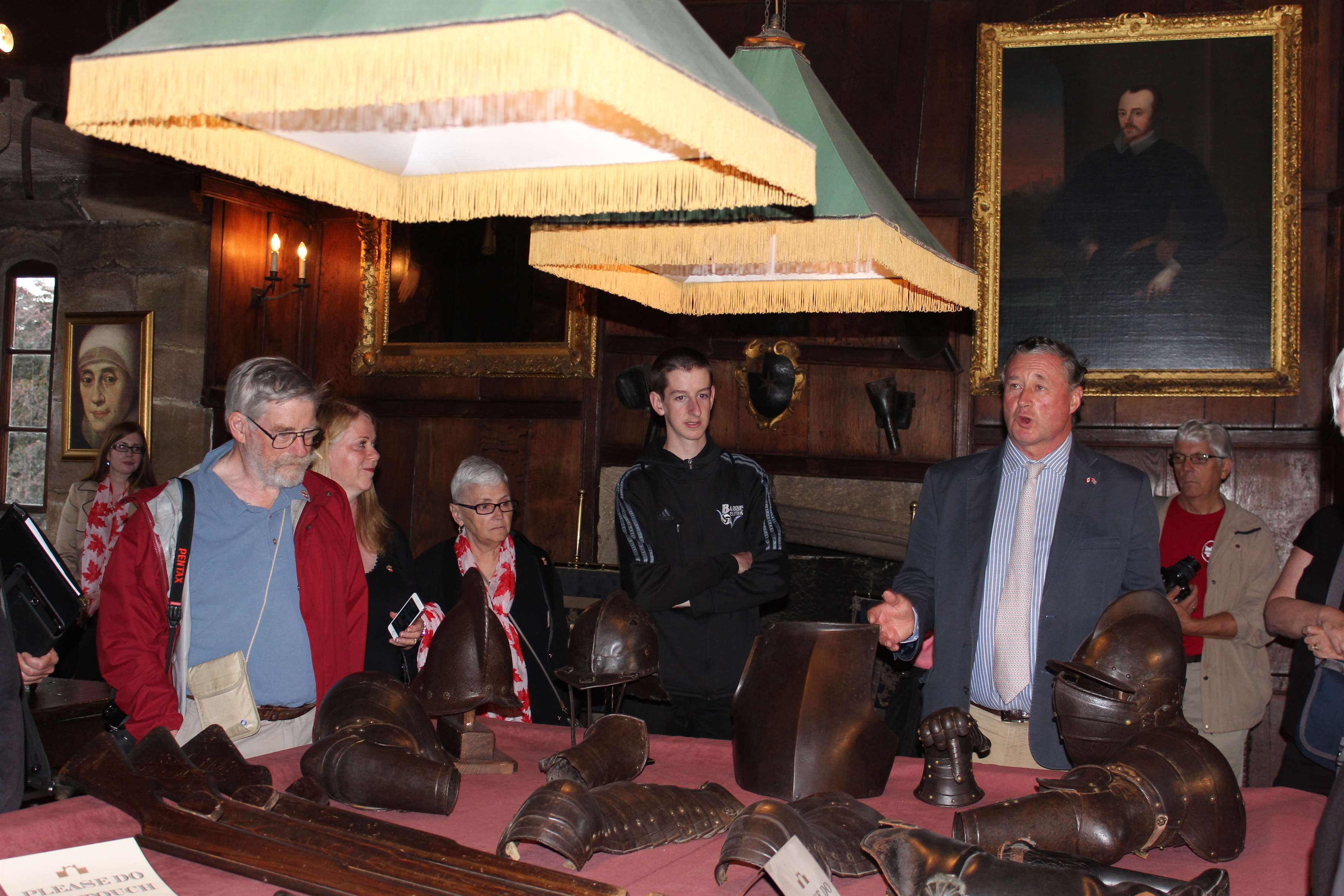 Sir Thomas Ingilby telling the KEC members about the history of Ripley Castle prior to their performance at All Saint's Chapel. 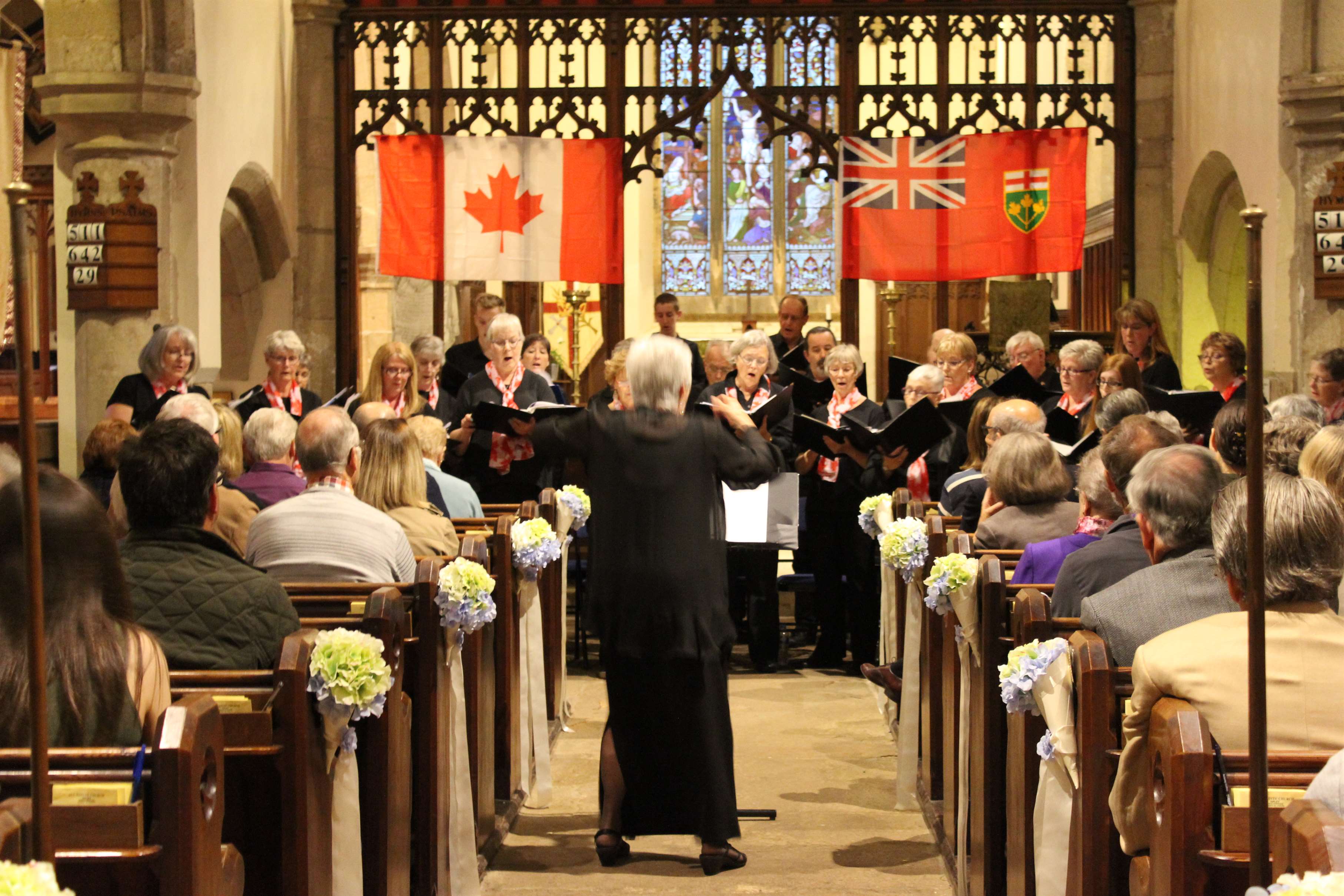 Barb McCann conducting the King Edward Choir during their performance at All Saint's Chapel at Ripley Castle.

The evening concert was held at the Church with a full house of local residents in attendance. The choir presented a variety of Canadian and North American songs which were well received by the audience. Following the concert, Sir Thomas had laid on a wonderful reception in the castle with local lamb stew followed by Eton Mess for dessert. At 10pm everyone went to the patio and were entertained by wonderful fireworks display over the lake and a spontaneous rendition of O Canada. An amazing way to celebrate Canada's special day! 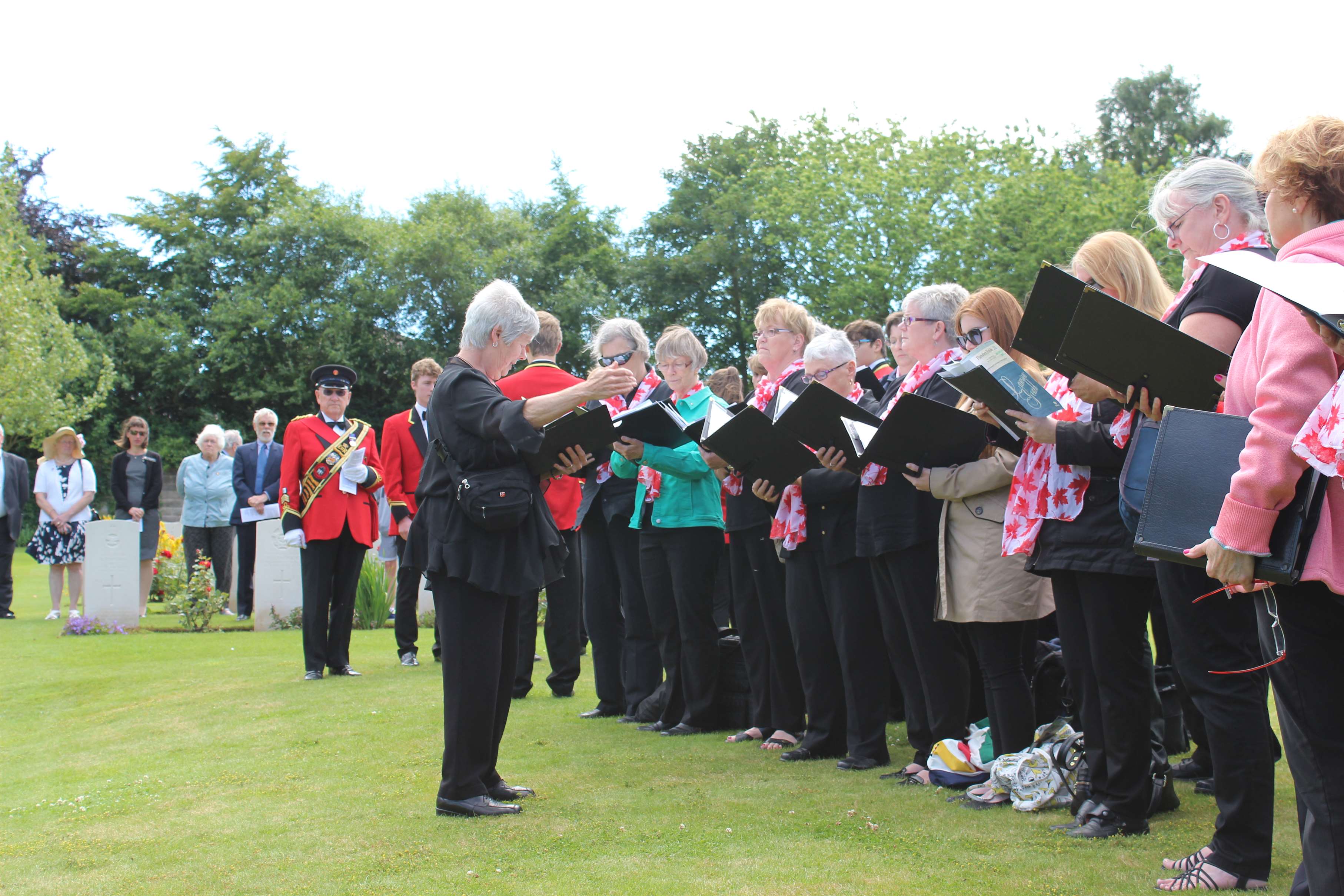 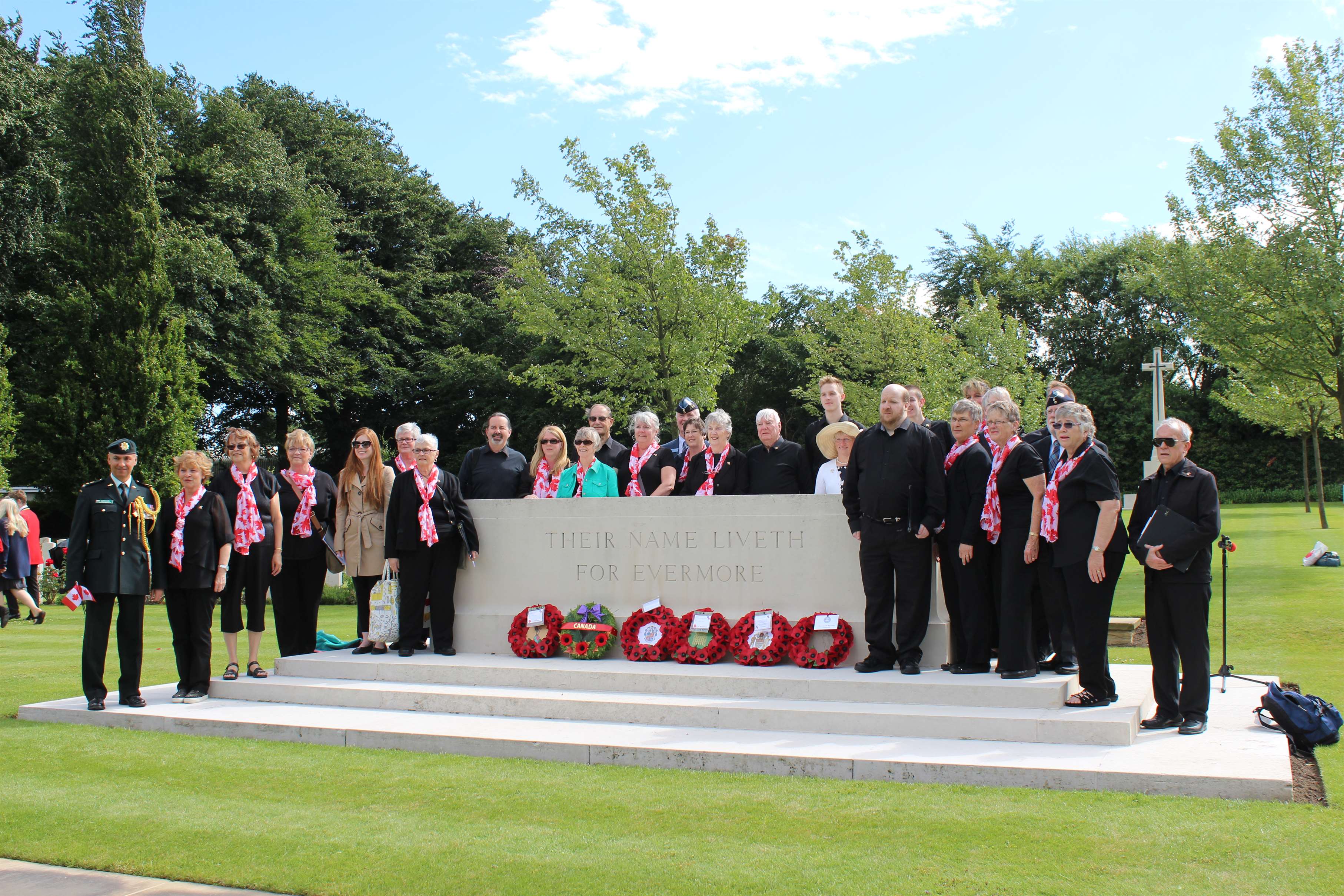 The King Edward Choir and the Tewit Youth Band provided the music at the RCAF Memorial Service at the Stonefall Cemetery in Harrogate, UK.

During the choir's visit a joint concert was held with Harrogate’s "Rock Up and Sing" choral group. The choir also participated in a musical fundraiser at The Valley Gardens and there were many impromptu open microphone evenings in some of the local pubs. One special event was our participation in a moving memorial service at Stonefall Cemetery where the choir, the Tewit Youth Brass Band and many dignitaries gathered to honour 666 members of the Royal Canadian Air Force who died during World War II and are buried in Harrogate. The choir gave a solemn and moving choral rendition of John McRae's "In Flanders Fields" and placed Canadian flags on the Canadian graves. It was a great honour to be a part of this important celebration.

Following the service, the choir was invited to English tea in the Harrogate Council Chambers, hosted by the Mayor Anne Jones and other Council members. The Mayor explained her role and allowed some of our younger members to try on her robes and sit in the Mayoral chair. Much fun was had by all. 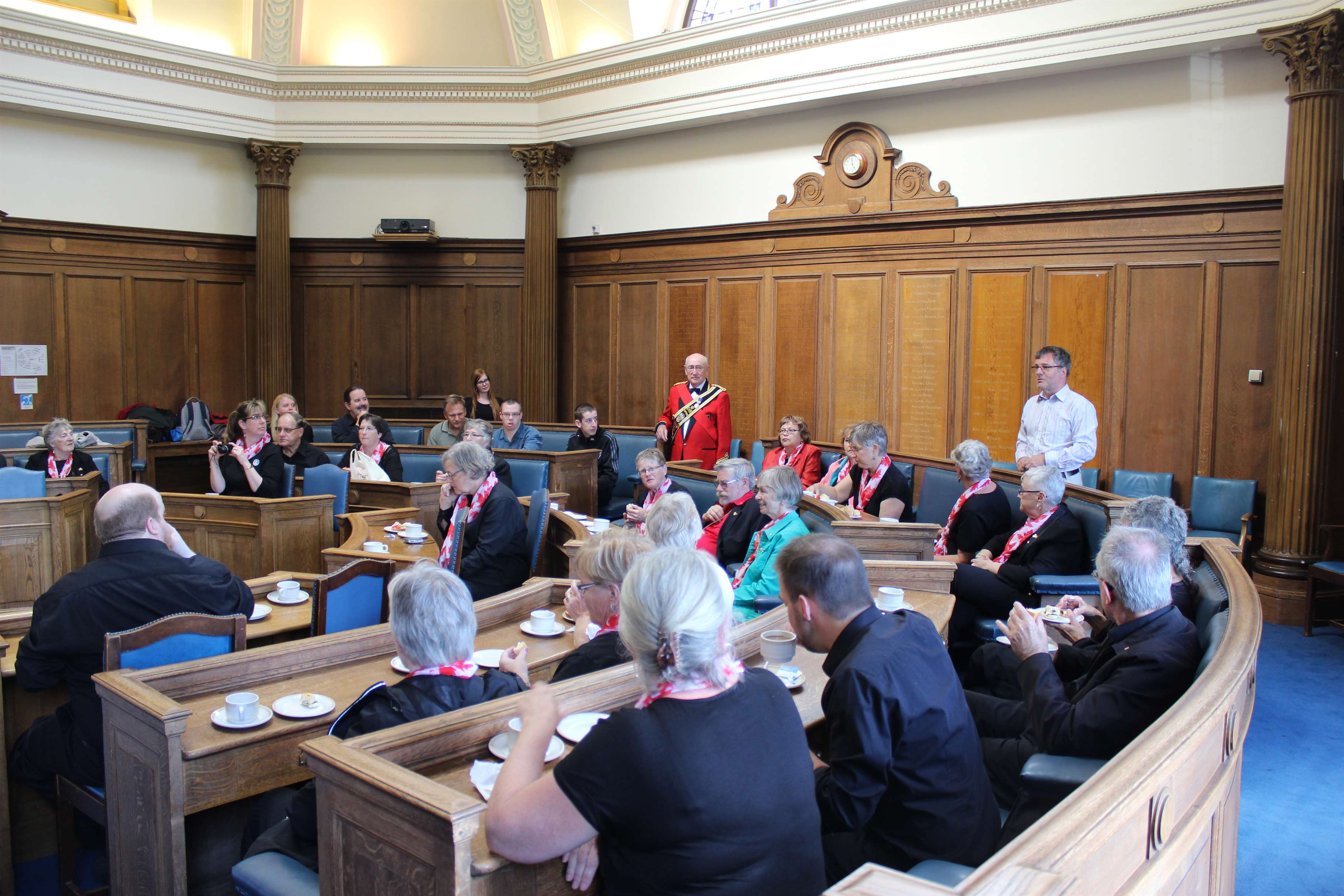 The King Edward Choir enjoying tea in the Harrogate Council Chambers after their performance at the Stonefall Cemetery. 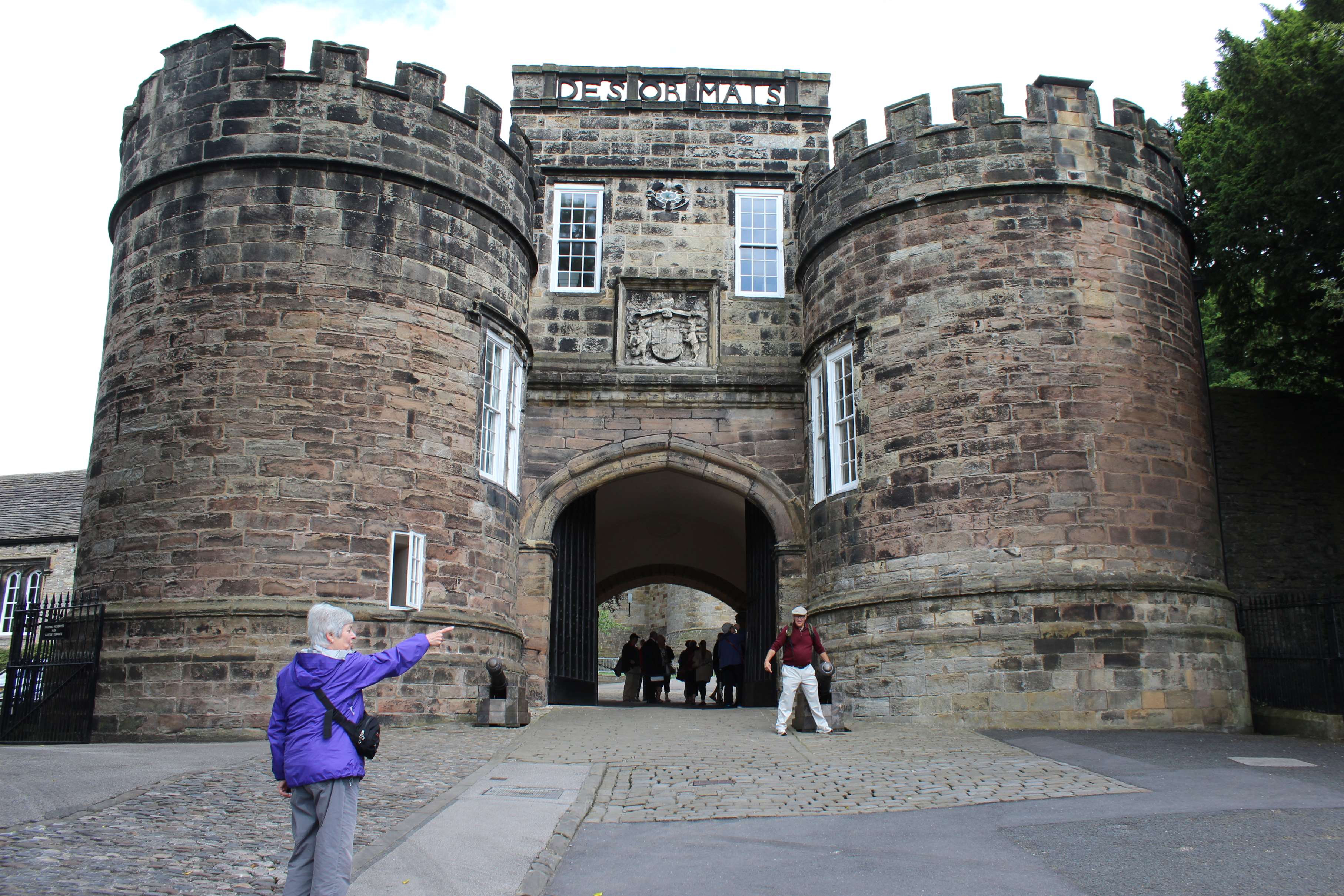 Many activities were arranged by our host, Michael Newby, and the choir was kept very busy visiting some of the wonderful, historic towns and monuments. These included a visit to Knaresborough on Market Day, with a short impromptu concert in the marketplace and a visit to the 900-year-old castle, which was owned at one time by King John and was later destroyed by order of Cromwell following the Civil war. The castle offers incredible views of the River Nidd in the gorge below with its soaring train viaduct at the entrance to the town. Another Day was spent in Skipton where the choir experienced a canal boat tour on the Thanet Canal (Leeds and Liverpool system) followed by an interesting tour around Skipton Castle. This castle is in exceptional repair having been saved from destruction after the Civil War by the judicious actions of Lady Ann Clifford who managed to maintain positive relationships with both sides. The castle, which is medieval and Elizabethan, is said to be haunted and has lost its upper level but remains in good condition for the family that still lives there. The tour included an opportunity to see the kitchens, strong room and living quarters in pristine condition. 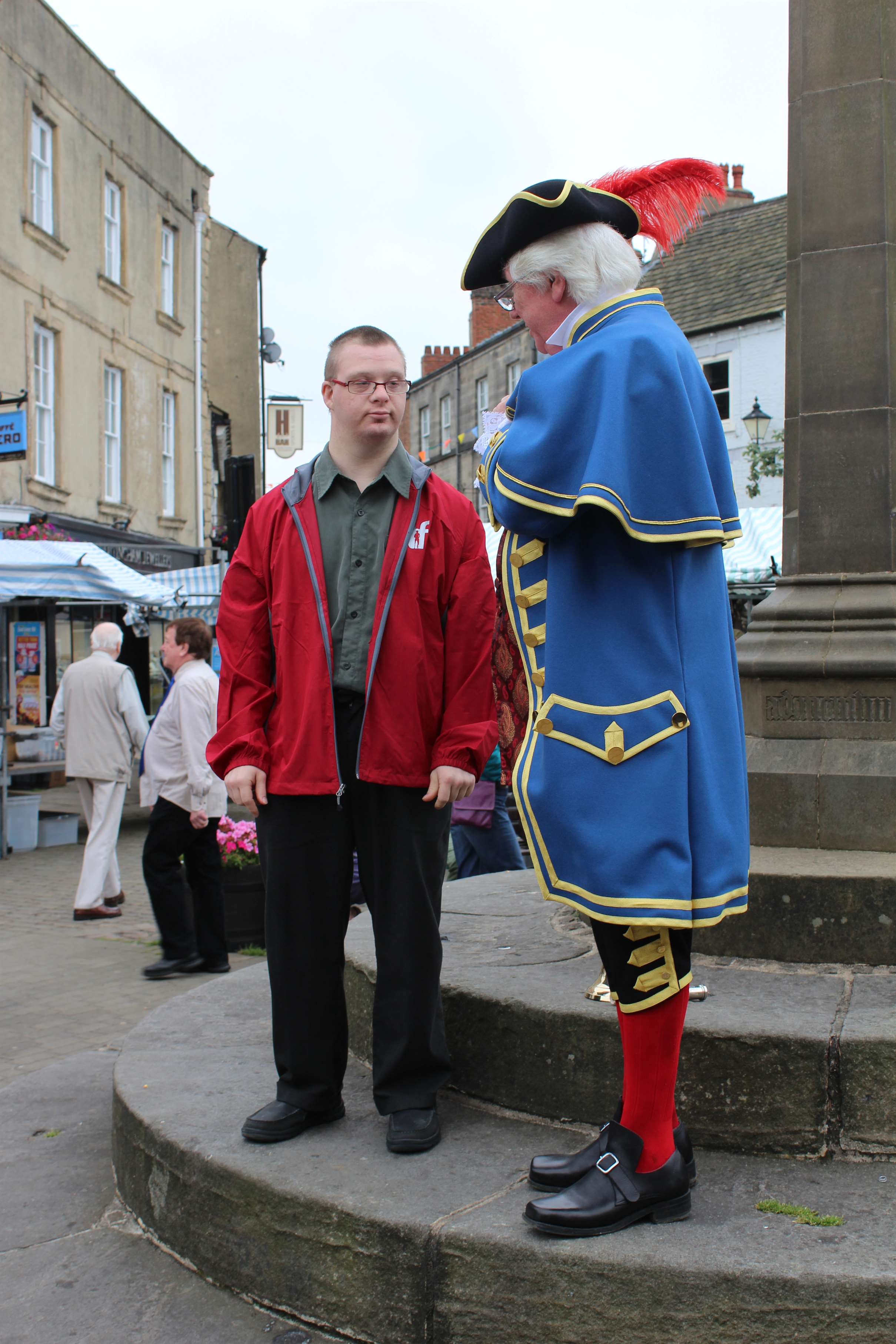 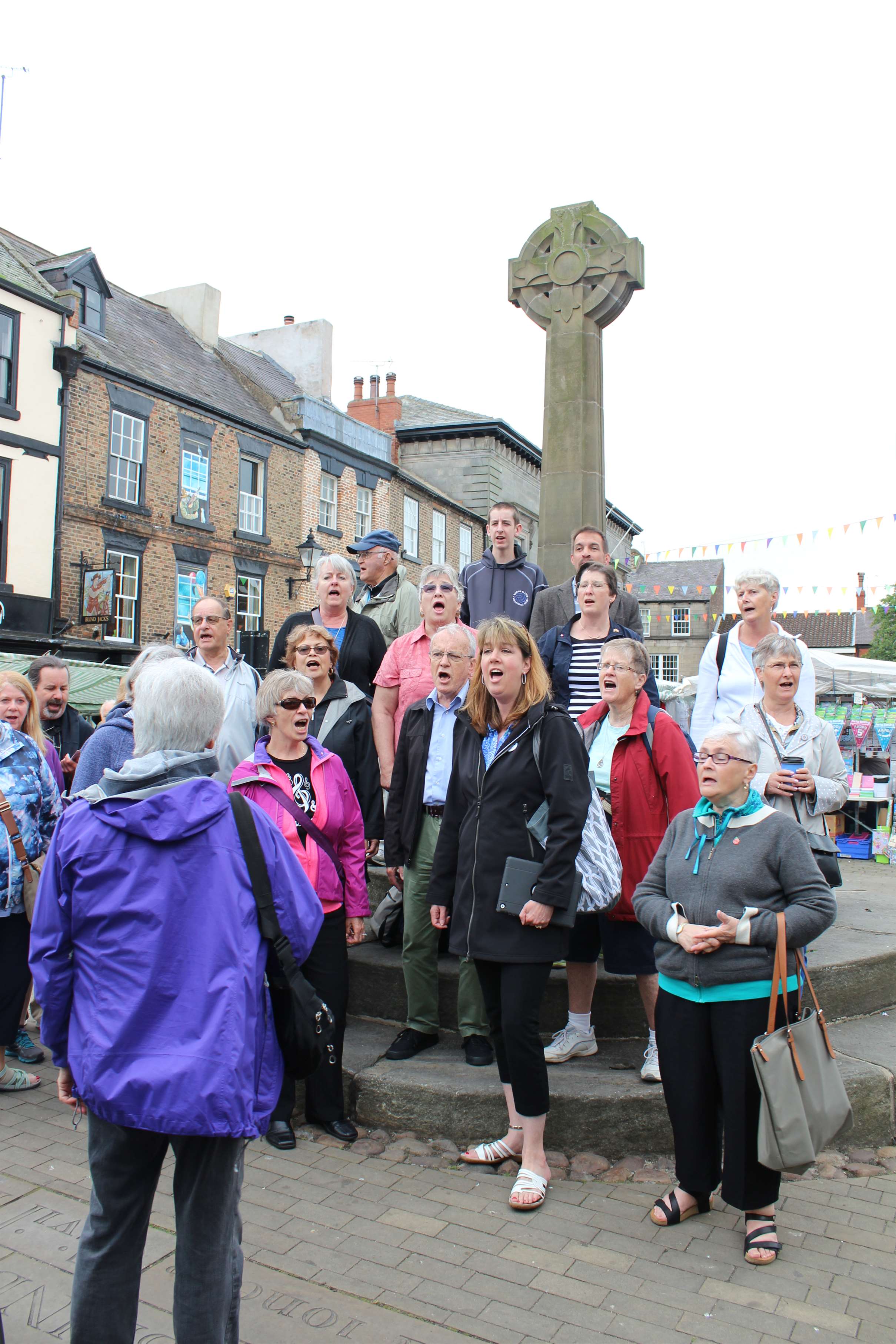 During the visit to Knaresborough on Market Day, there was a short impromptu concert by the King Edward Choir.

An exciting day was spent in York, travelling by train with beautiful scenic views of the surrounding countryside. There were opportunities to see the National Railway Museum, containing many generations of trains from the Rocket, to the Mallard, to modern high speed trains. Many choir members walked along the Roman Wall, visited York Minster (founded in the 13th century), The Shambles (a medieval shopping area) and the Jarvik museum which presents Viking York as it might have been before the Norman invasion. Another interesting tour took the group to Fountains Abbey, founded in the 12th century and destroyed by Henry VIII when he pillaged the monasteries. The Abbey is now a part of Studley Royal with its picturesque gardens; a beautiful spot to walk and enjoy the views. The choir gave another impromptu mini-concert in the cloisters, the rounded ceilings presenting a neat acoustic. From there the tour took us to Ripon where everyone attended evensong in the beautiful cathedral. There was an opportunity to visit the Workhouse Museum which gave a stark view of life in a workhouse setting and then on to a delicious fish and chip dinner! Our evening ended with the Hornblower sounding his horn four times to announce the end of the day, when, traditionally, the city would have closed its gates for the night. 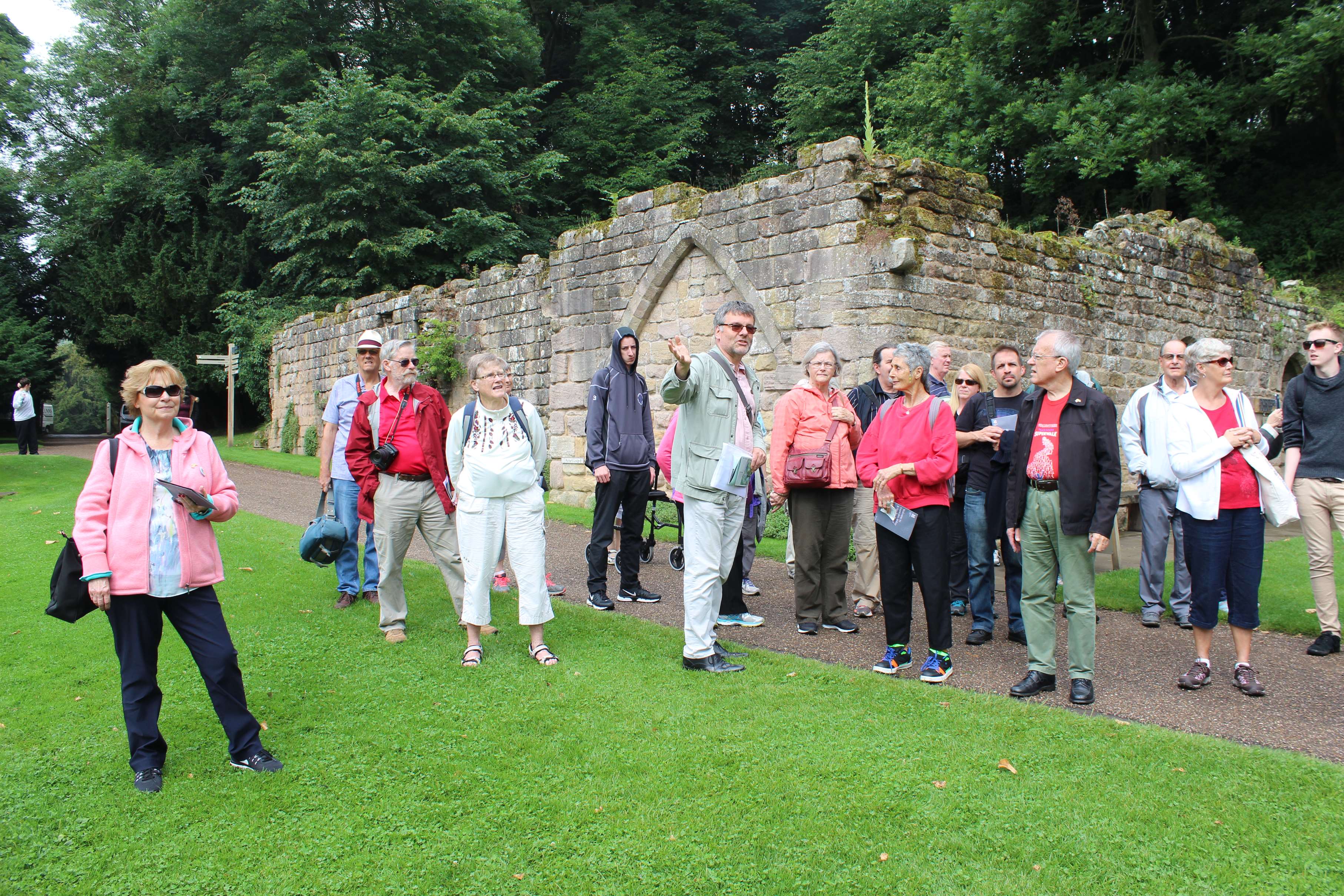 There were many opportunities for individual visits to the famous spa baths and take trips into the countryside to see steam trains and James Herriot Country. No visit to Harrogate could be complete without an English tea at Betty's; choir members enjoyed traditional sandwiches, small cakes, scones and cream, and a glass of champagne in addition to a choice of teas. It was definitely not a time to be on a diet! The final day found everyone at a downtown hotel for a traditional carvery meal (selection of roasted meats) served with delicious starters and divine English desserts. Gifts were exchanged and toasts made with happy opportunities to follow welcoming the Tewit Youth Brass Band to Barrie the following year!