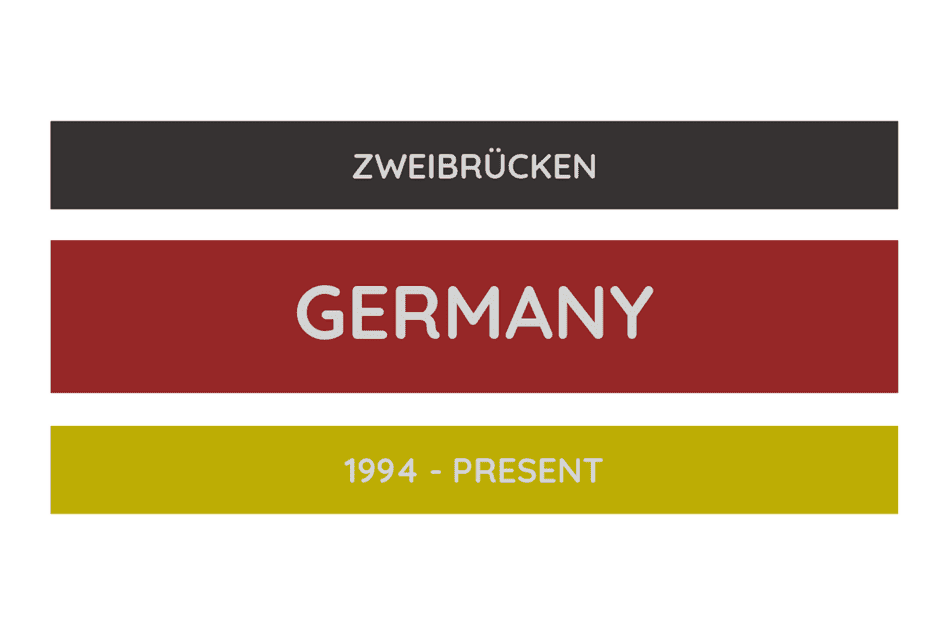 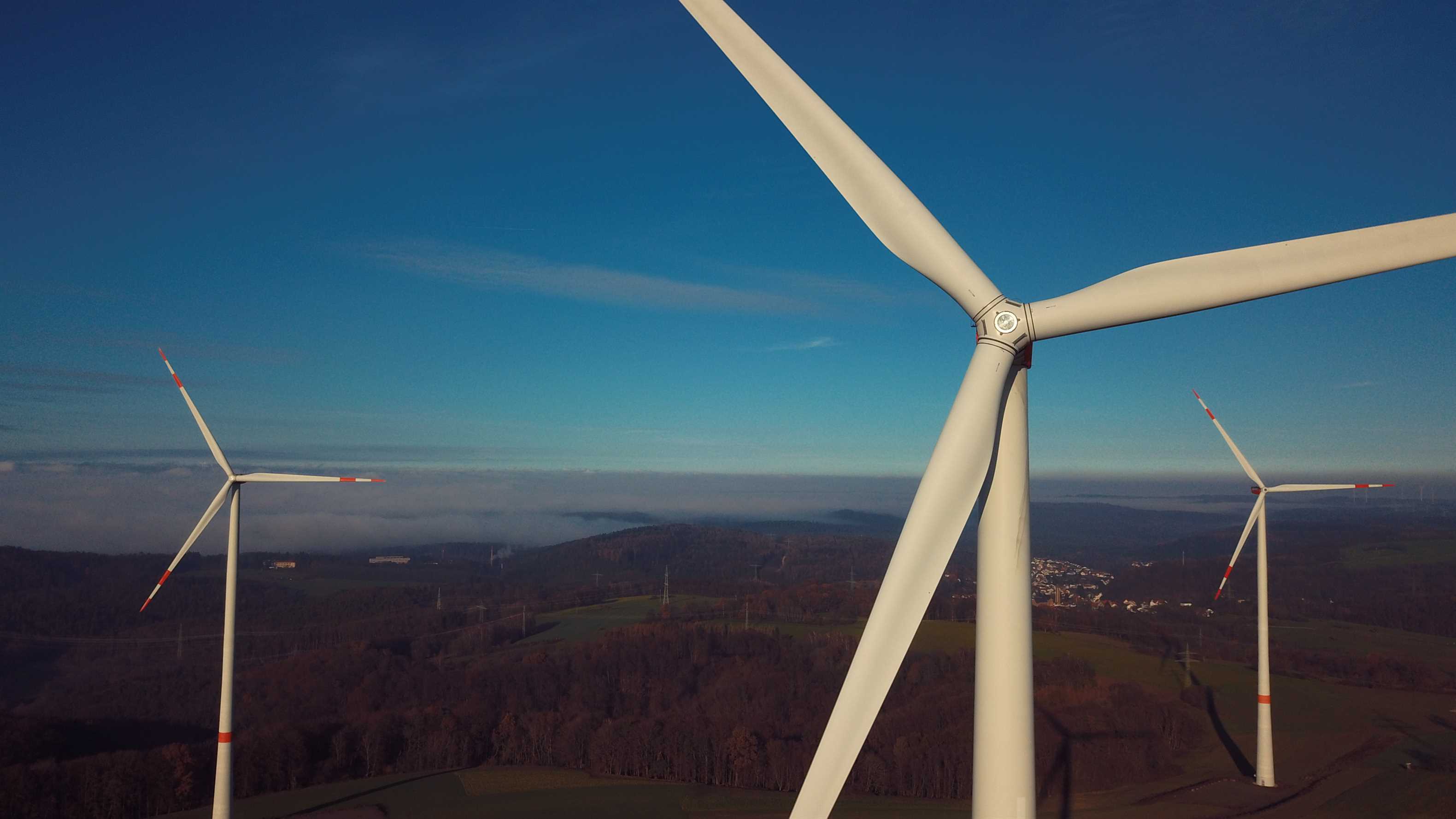 In the early 1950s after the establishment of the North Atlantic Treaty Organization (NATO), Canada as a founding member contributed several fighter aircraft to be stationed in France and Germany. The Squadrons of the Royal Canadian Air Force were organized into Wings and the first Wing in Germany in support of this NATO commitment was established at Zweibrücken, Germany in 1953. This presence would continue until 1969 and during this time Zweibrücken was home to thousands of Royal Canadian Air Force personnel and their dependants. 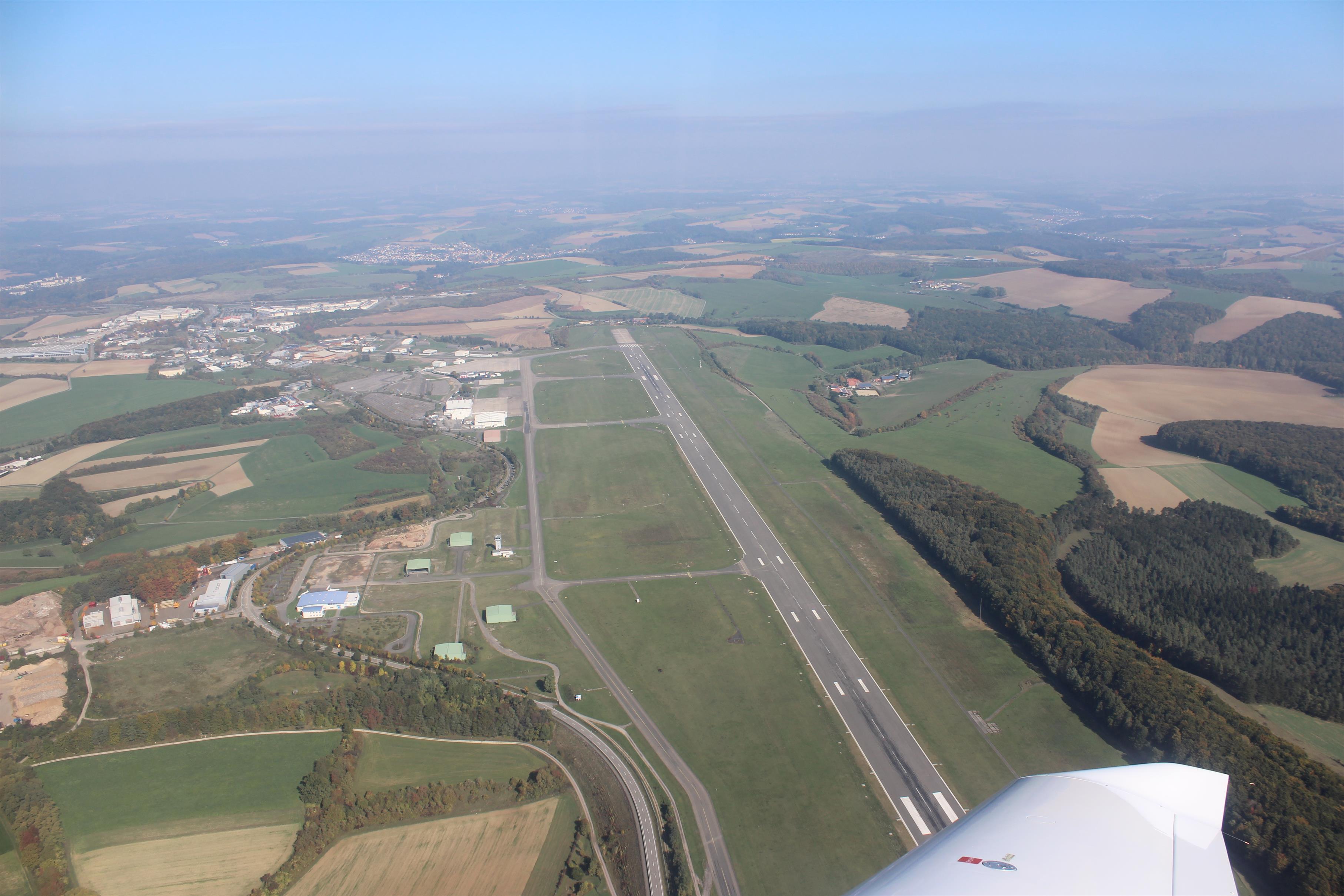 A view of the main runway (8,776 feet long) at the Zweibrücken Airport, former home to a Royal Canadian Air Force Station between 1953 and 1969. 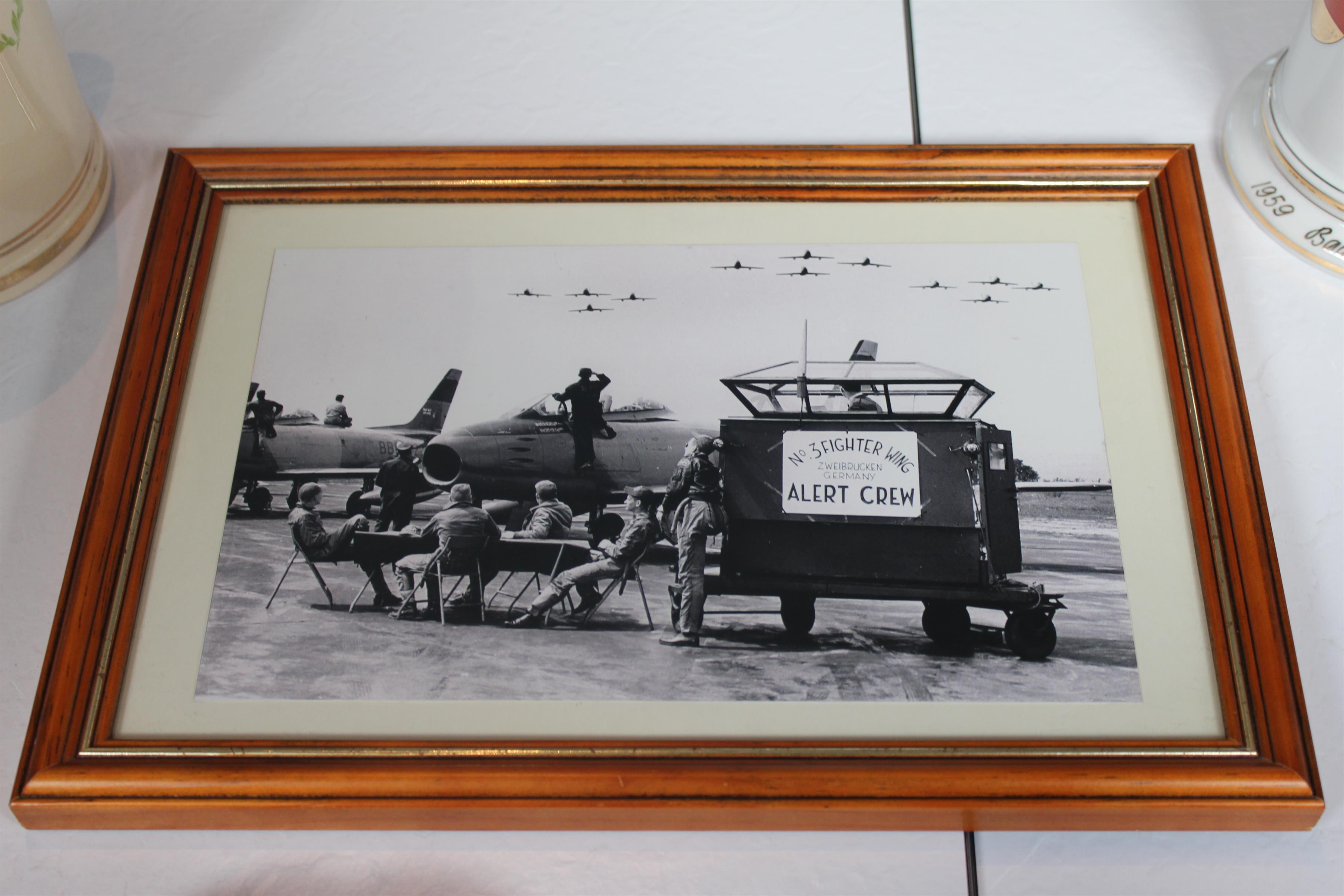 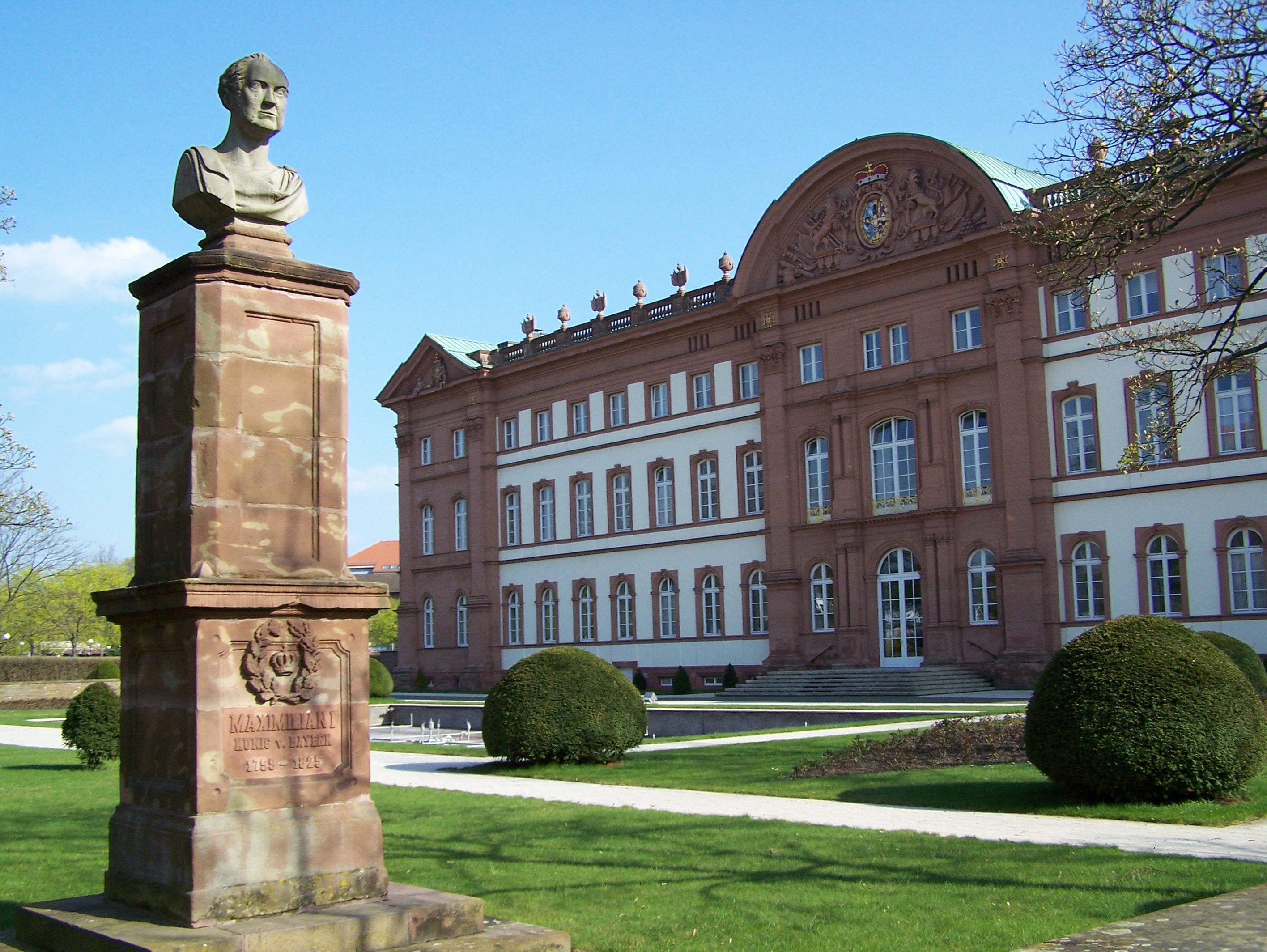 This picture shows the garden side of the Zweibrücken Castle. The Castle was originally built between 1720 and 1725 as a residence for Duke Gustav Samuel Leopold. The building was destroyed during an air raid on the night of the 14th of March 1945 but was rebuilt in the early 1960’s and today houses the Palatine Higher Regional Court. The bust is of King Maximilian I of Bavaria. He was the last Duke of Zweibrücken and as a child spent time in this residence. 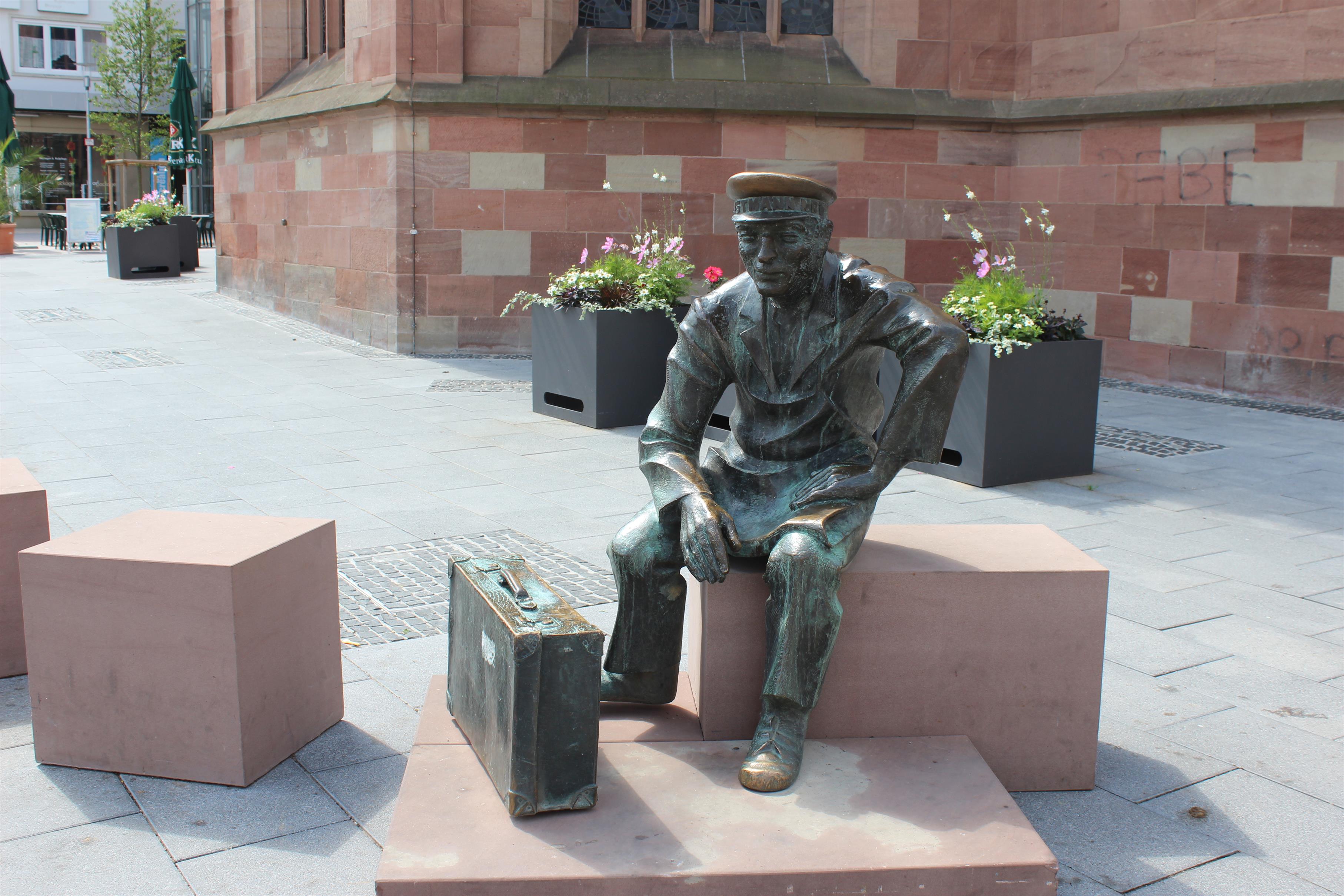 This piece of art shows the person of Ludwig Arnold, called Luiche. He was a porter who earned a living carrying suitcases of travellers who had arrived in the city by train. In addition to carrying luggage, he also earned a living selling pretzels and postcards. The bronze figure of Luiche with his suitcase is located in front of the Alexanderskirche.

In January 1994, Major (ret’d) Jean Maurice Pigeon, MStJ, CD approached then Mayor Janice Laking with a proposal to twin the City of Barrie with the City of Zweibrücken. Concurrently, Mrs. Sieglinde Pigeon, a Barrie resident who was a native of Zweibrücken, while on a visit to family in her hometown met with city officials to discuss the merits of twinning with a Canadian city. There she met with Mr. Fritz Presl who had learned to skate and play hockey in the Peter Cunningham Memorial Arena located at the Zweibrücken aerodrome. He later went on to become a referee in the Federal Ice Hockey League of Germany. His love of hockey made him a natural ally in the efforts to twin Zweibrücken with a Canadian City. This action would complete the recognition that there had been four military units with deep ties to Zweibrücken. 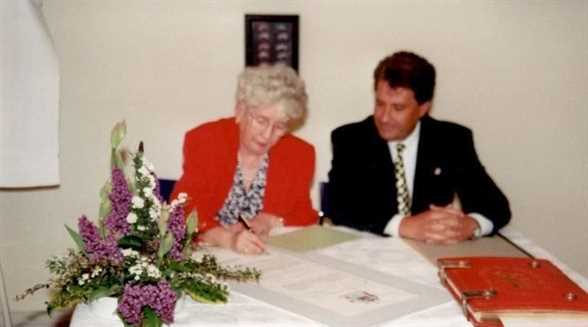 Janice Laking, Mayor of Barrie and Hans-Otto Streuber, Lord Mayor of Zweibrücken, signing the Twinning Documents in the Ducal Room of Zweibrücken City Hall on May 7, 1997.

The City of Barrie had always enjoyed a close relationship with the Canadian military stationed in Borden, Ontario. Borden was the Birthplace of the Royal Canadian Air Force in 1924 and many of the personnel who had served or trained in Borden eventually served with the Royal Canadian Air Force in Europe, specifically in Zweibrücken, Germany. Rob Warman, a City of Barrie Alderman who had retired from the military while stationed in CFB Borden, agreed to head up the German Twinning Committee of the City of Barrie. He continues to serve in this capacity.

After a suitable “courtship”, arrangements were made to formalize a twinning relationship between the two cities. On May 7, 1997, in the City of Zweibrücken, then Barrie Mayor Janice Laking and Oberbürgermeister (Lord Mayor) Hans-Otto Streuber signed the Twinning Certificates. 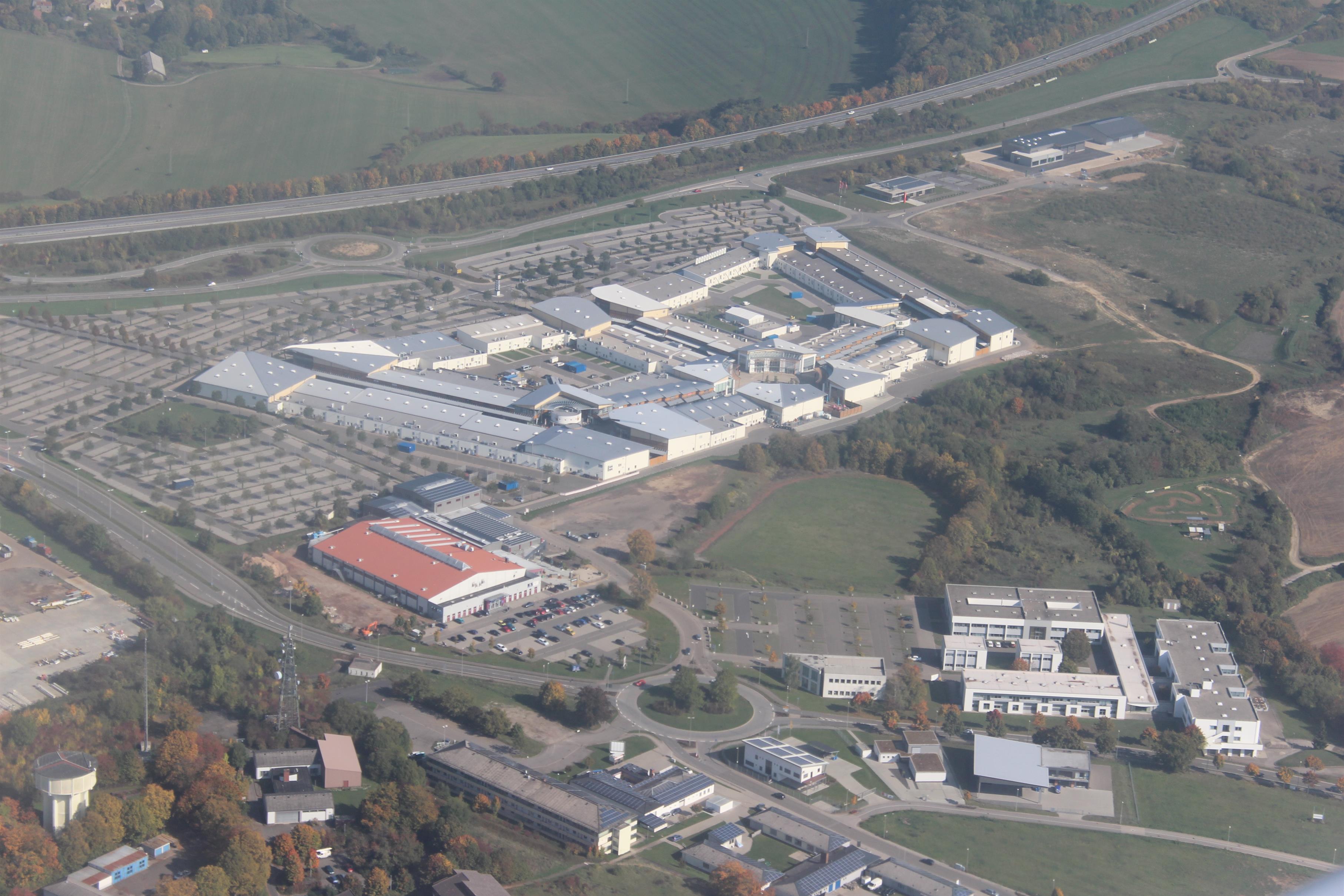 A photo of the Peter Cunningham Memorial Arena with the Zweibrücken Fashion Outlet, which was opened in 2001, just above it. At the time, it was the largest Outlet Centre in Germany. As of 2020, there were approximately 120 shops in the Centre employing more than 1,200 persons.

On May 7, 2022, we will mark the 25th anniversary of the formal twinning of our two cities. Throughout the 25 years, there has been a robust twinning programme which has seen regular exchanges of sports teams, culture groups, tourists, and students between the two communities. There are a number of activities in the planning stages designed to celebrate this important milestone during 2022.

The benefits of twinning relationships are many and the friendships that have grown from our twinning are a reward in their own right.

More information on Barrie's partnership with Zweibrücken can be found in the Zweibrücken section. If you have an interest in volunteering with any of these groups please use the information below to contact us.